This page provides detailed information about AT commands set and how to use the Configuration tool, which retrieves and sets all configurations of WIZ550S2E via Ethernet. Users can change any value of the WIZ550S2E and communicate with the peer system through TCP(or UDP) socket by sending AT commands.

This section provides a list of WIZ550S2E AT commands and their functions. Users can input commands and parameters through USART line.

The three byte Trigger Code need to be isolated = without CR(0x0D), LF(0x0A)

Some parameters are mandatory and others are optional. Parameters must be entered in the order of format column given by the command tables. Although the optional parameter is not used, the comma delimiters ',' must still be included in the command. In most cases, valid commands return the character [S] and invalid inputs return [F]. The possible responses sent from WIZ550S2E to the user are described as Responses. Below are examples of user input. As you can see, WIZ550S2E return “\r\n” back instead of “\r”, which means user (host system) always handle '\r\n' as the only delimiter.

Responses are listed below.

Note that < IP>,< SN>,< GW>,< DNS> address of response are not actual addresses, but addresses stored in the memory. So when DHCP is on, they are usually different from actual addresses.

The values set via AT+MUSART, AT+NSET (except AT+NMAC) are basically only until the module is reset. (In Data Mode, the corresponding setting value is shared. Check through Search in Configuration Tool) In other words, when module is reset, it returns to the value before setting. However, the user can save the set value through the corresponding command (AT+MSAVE) so that the module does not change even if it is reset. That is, it is the same as Setting function in Configuration Tool. 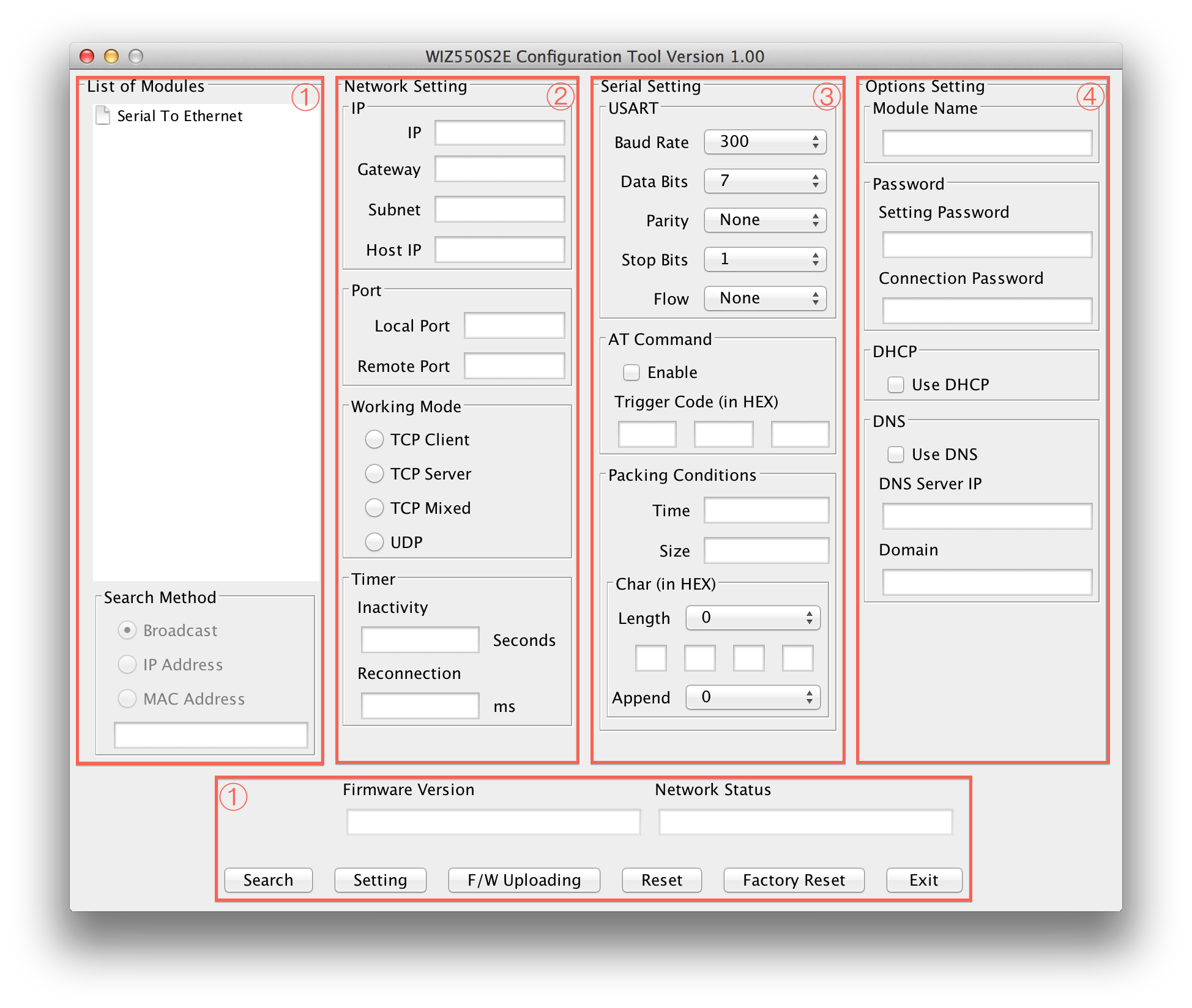 WIZ550S2E Configuration tool is an application program which is based on java and can be used in most OS platforms including Windows, MAC OS and Linux. Please download .jar file and execute it over Java Virtual Machine.

There are two options on how to run the configuration tool. 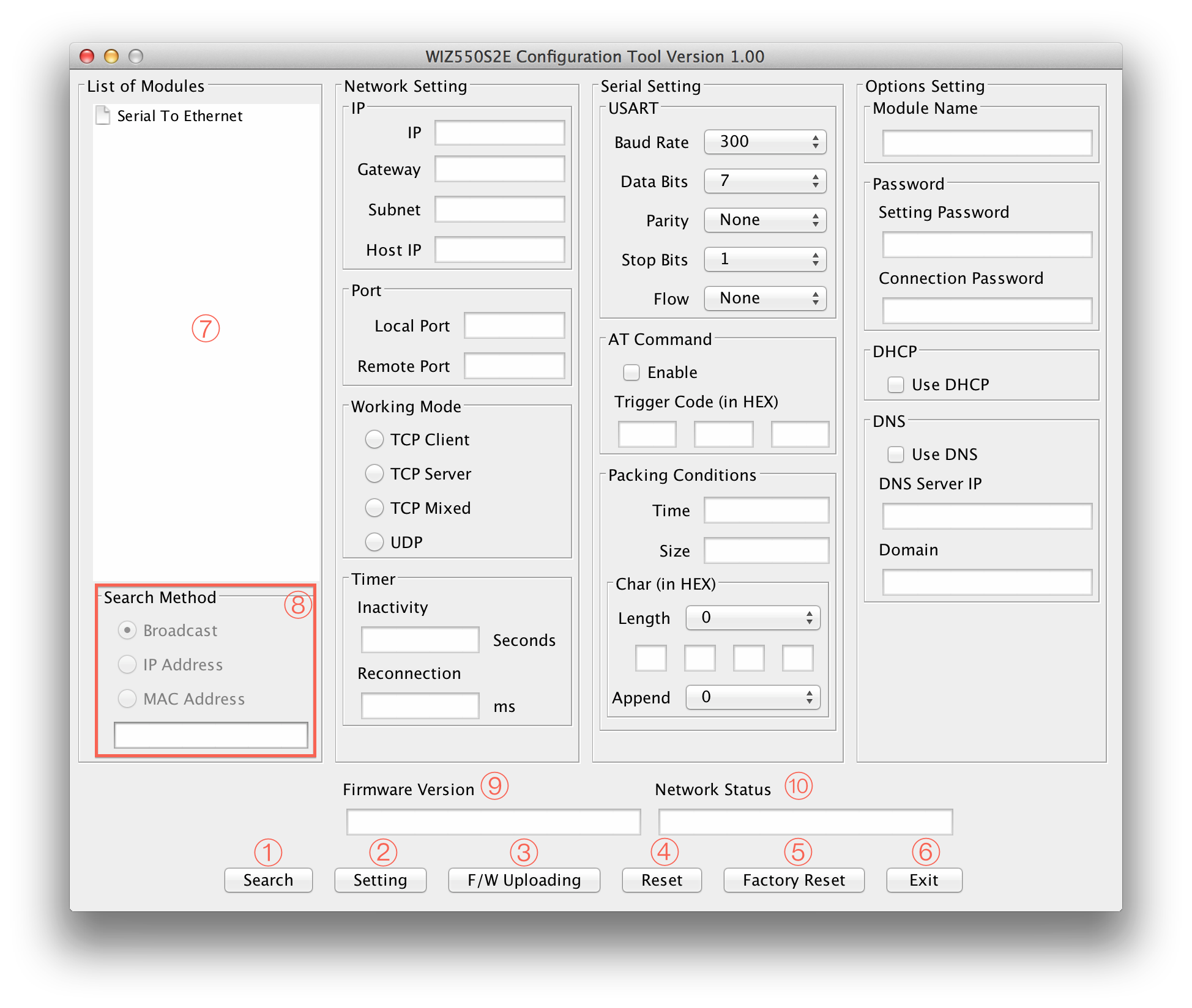 The Search function is used to search for all existing WIZnet's WIZ550 series modules on the same LAN. By using UDP broadcast, it finds all modules on the same subnet, and found devices will be listed in the “Serial to Ethernet” tree(Search Window) with its MAC address. 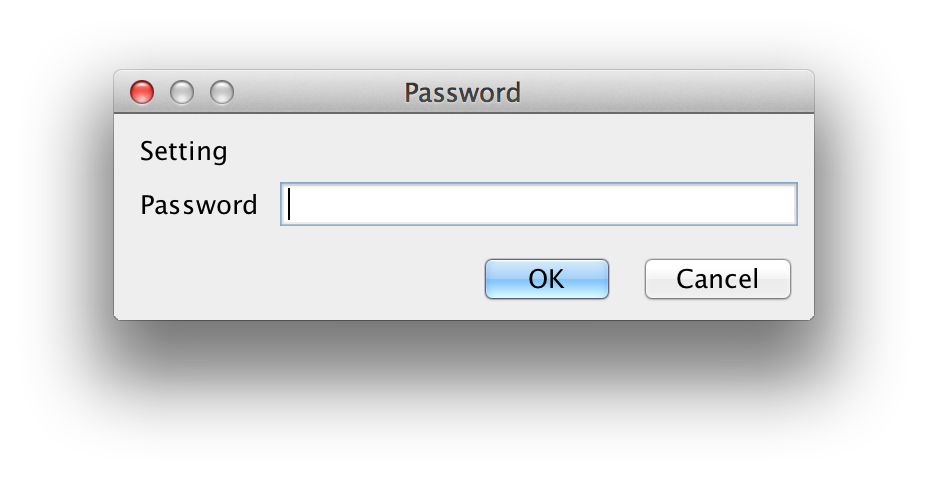 Firmware will be uploaded through TFTP. Click “F/W Uploading” Button and a popup window will shows as follow. 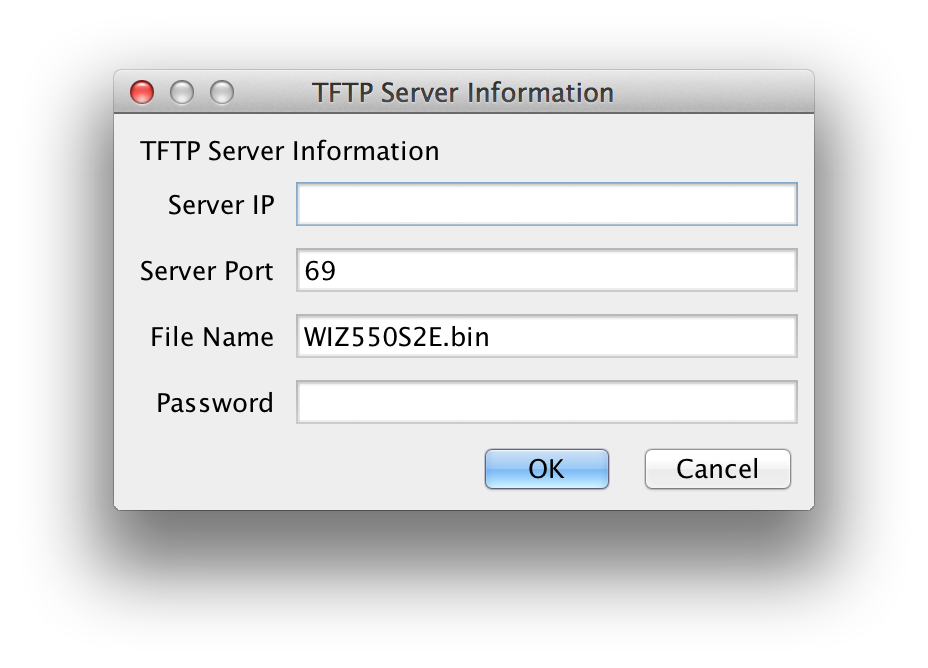 ☞ WIZ550S2E Configure tool is not supported TFTP server. So you use TFTP program separately.

This is the function which makes Module reboot. This requires password to reboot.

All setting value is initialized to factory default, if the “Factory Reset” button is clicked. Factory default values of WIZ550S2E are listed below.

If you click the “Search” button, all MAC addresses on the same subnet will be displayed.

It displays the firmware version.

This field shows the current status of network connection. 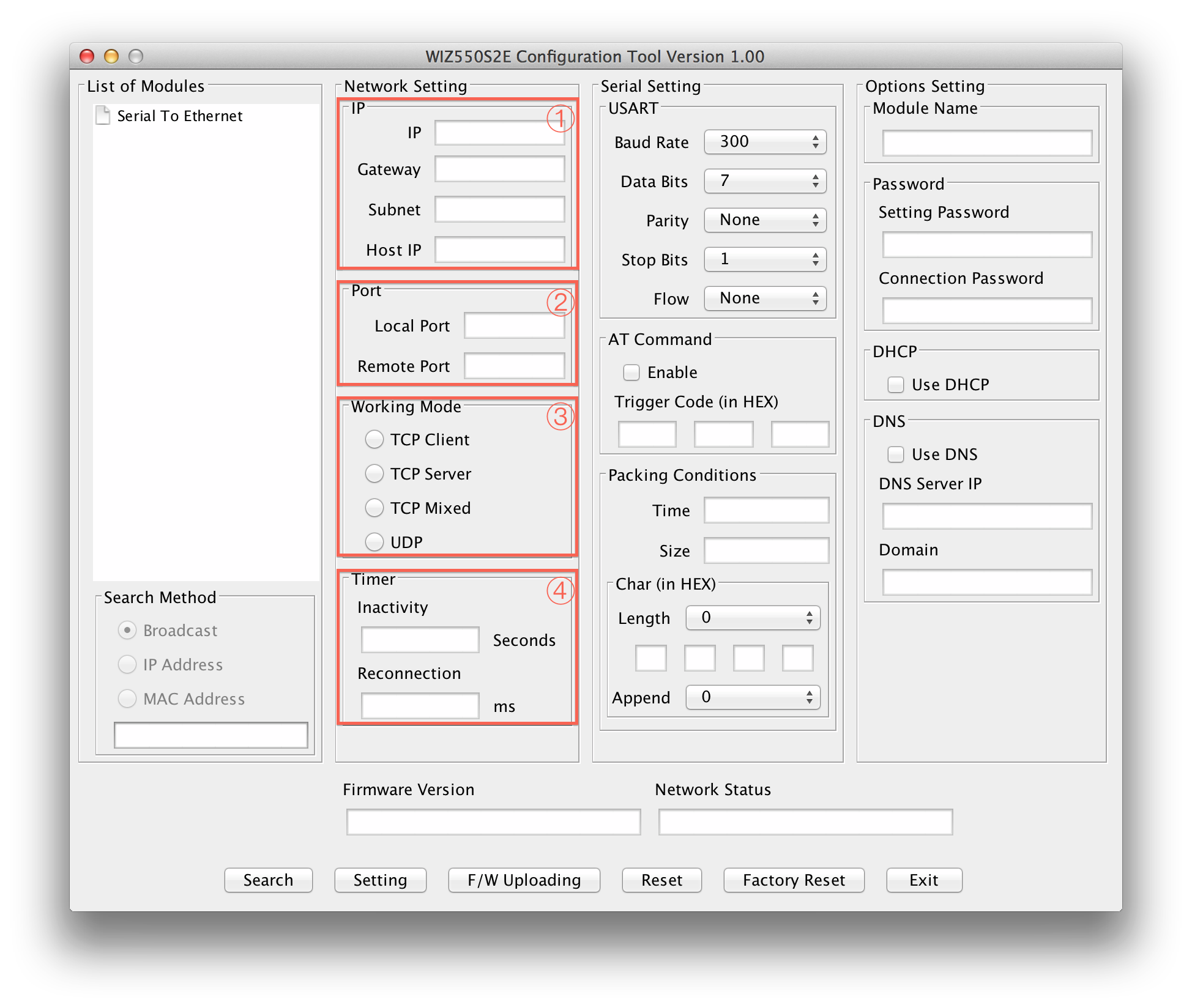 This section is for setting WIZ550S2E mode's network information

☞ If you are unclear about your Local IP, Subnet Mask, Gateway information, you have to get this information from your network administrator. If the IP address is not correct, IP collision or network problems may occur.

This section is for setting WIZ550S2E's Port information.

During the TCP Server mode, WIZ550S2E waits for the connection request. TCP Server mode can be useful when the monitoring center attempts to connect to the device, while WIZ550S2E is installed, in order to check the status or provide commands. Normally WIZ550S2E is on the waiting status, and if connection request (SYN) from the monitoring center is received, the connection is established (ESTABLISH), and data communication is processed (Data Transaction), and finally connection is closed (FIN). In order to operate this mode, “Device IP”, “Subnet mask”, “Gateway” and “Local port” should be configured first.

The Data transmission proceeds as below.

If WIZ550S2E is set as TCP Client, it tries to establish connection to the TCP server. To operate this mode, “Device IP”, “Subnet mask”, “Gateway”, “Remote host”, and “Remote port” should be set. If “Remote host” has a domain name, you should use the “DNS server” field. In TCP Client mode, WIZ550S2E can actively establish a TCP connection to a host computer when power is supplied.

The Data transmission proceeds as below:

Like TCP Server mode, the TCP Mixed mode is useful in case where the monitoring center attempts to connect to the serial device, while WIZ550S2E is used, to check the device status. In addition to this, if any emergency occurs in the serial device, the module will change to TCP Client mode to establish the connection to the TCP server and deliver the emergency status of the device.

Inactivity Time can also be used if the TCP server system unexpectedly shuts down. In this case, there is no data communication, and WIZ550S2E will close the connection and enter into waiting state if the defined inactivity time elapses.

This is the interval time which WIZ550S2E tries to connect again after connection is closed. This is valid only in "TCP Client" or "TCP Mixed" having data from serial prior to TCP connection is established. 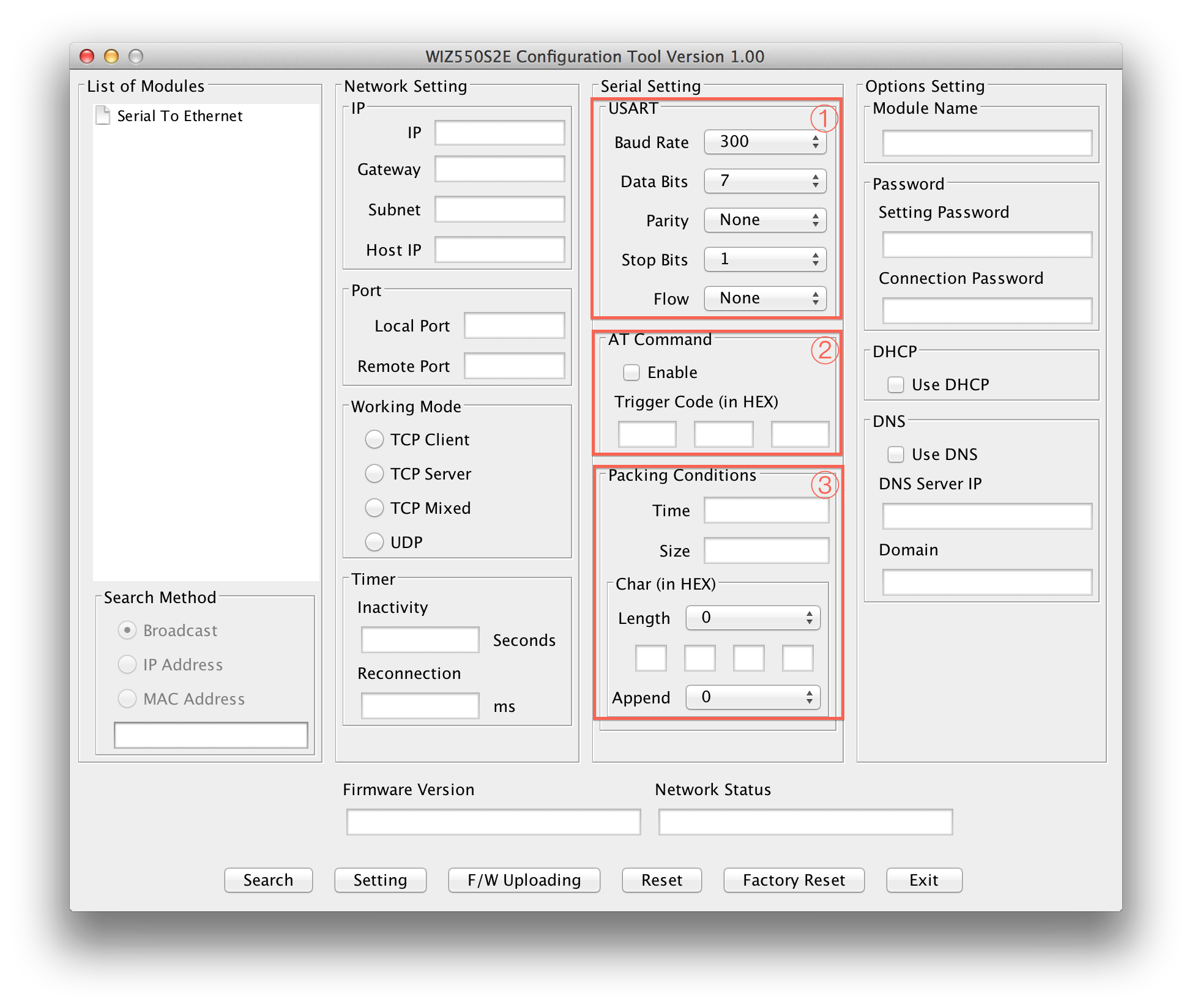 This menu is used for setting the serial port.

This function is controlling the module to allow the module could be capable to control the module through serial terminal (AT command).

Module Default setting: Enable
Default trigger to AT command: 2B 2B 2B in Hex.

Normally, data received from UART are sent to Ethernet immediately. But in many cases, users want to send data as a chunk of the whole frame without separated ones. This option is for packetizing data into one frame. 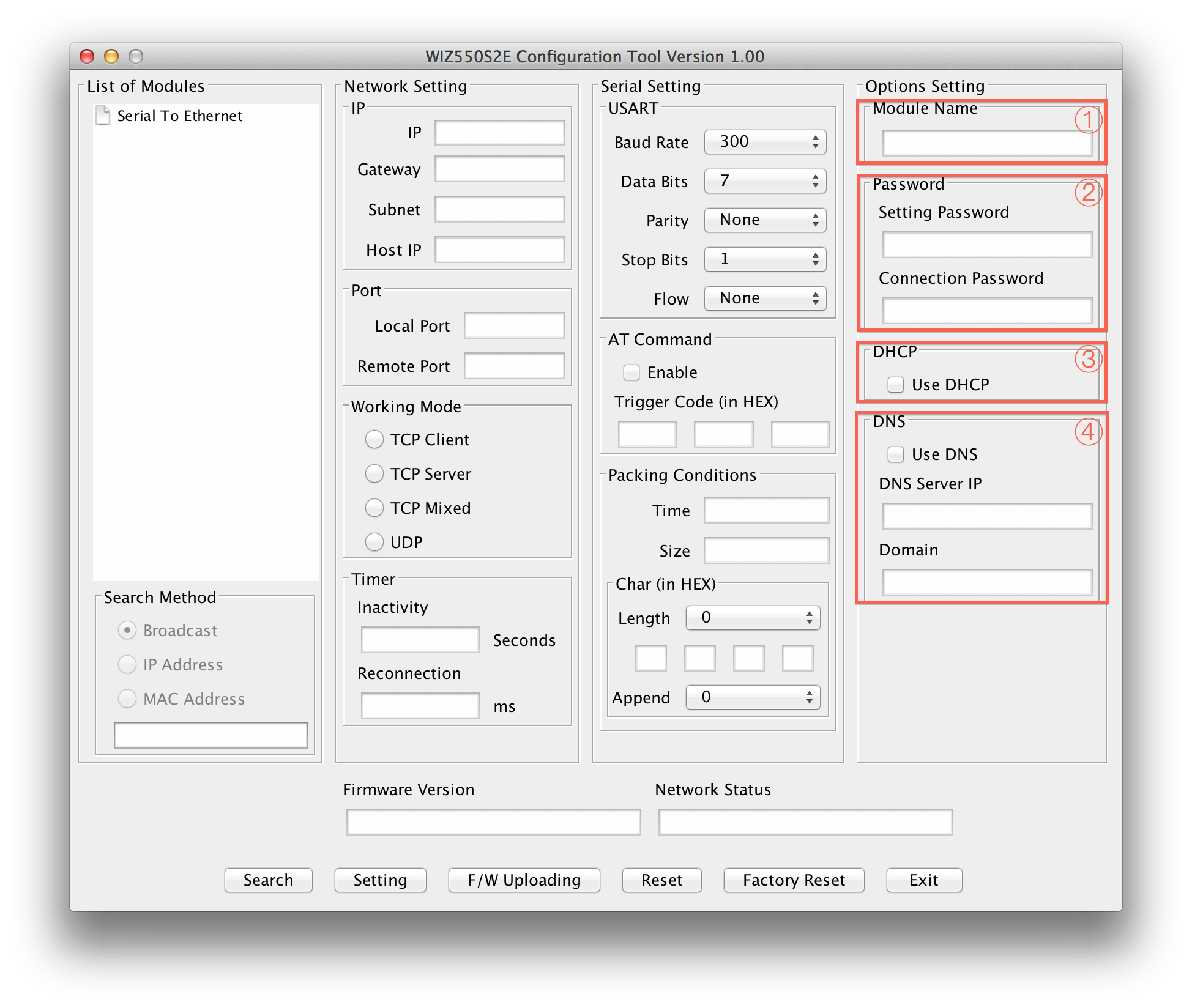 The device name is displayed in this area.
User can use this name to distinguish this module with others