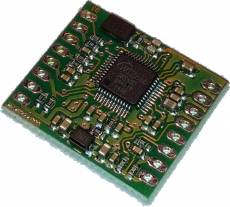 A small Adapter with 🌎W5500 chip + MCU (ATXmega8E5) for future purpose. The W5500's SPI I/F is free available and the MCU is free programmable and some IOs are available. 🌎eHaJo Netzwerk-Adapter

🌎The Ethernet Boosterpack in 43oh Store was developled by Rob from the 🌎43oh Forums. To know more about the Ethernet BoosterPack, visit Rob's thread here. This BoosterPack is perfect for all TI MSP430 Launch-Pad MCU boards and is fitted with the 🌎W5500 chip which is an embedded Ethernet controller composed of a fully hardwired market-proven TCP/IP stack and an integrated Ethernet MAC & PHY.

The breakout board includes all the passives and a crystal needed to drive the chip. The 🌎WIZnet 🌎W5500 does not include a pre-programmed MAC, you will need to obtain one for production use. As this is a 3.3V part and no level shifting is included, if you want to use this board with a 5V Arduino (ie, most of them) then you’ll need to do some level shifting on the SPI interface yourself. These may eventually be put into production, but for now it’s purely for my own code development. 🌎W5500 Breakout 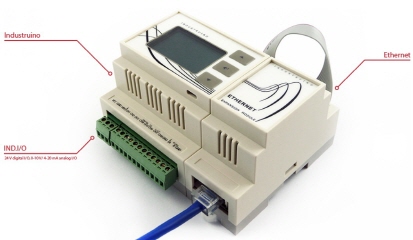 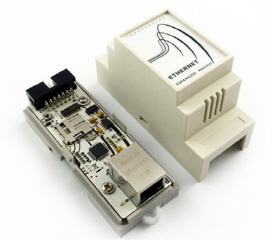 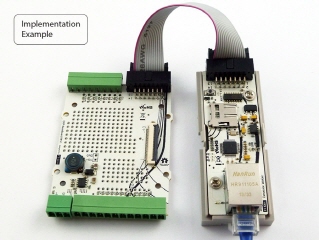 🌎This DIN-rail mountable module adds network connectivity to your Industruino. It easily connects to the Industruino EXP or IND.I/O kit through the 14p IDC expansion port. A range of example code is provided, which will enable you to very quickly build an internet connected product. 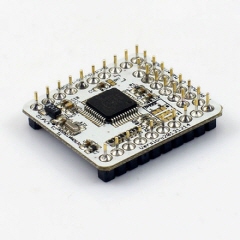 🌎USR-TCP232-301-PCB-module in TCP232-301;RS232/RS485 to RJ45/TCPIP/ Ethernet Converter; It has the following functions:10/100M auto detect interface;Can use a crossover cable or parallel cable connection;Work mode TCP Server, TCP Client, UDP, UDP Server;Working model related parameters can be set via a serial port or network;5 V RS232/RS485 level ; It has been widely used in IOT field. Besides, it has characters of low price, high speed and high stability. This module is based on the 🌎WIZnet 🌎W5500 Ethernet chip. 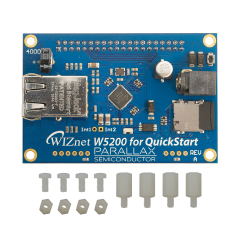 🌎The WIZnet W5200 for QuickStart allows your QuickStart board to serve data to an Ethernet network or even the Internet. 🌎The WIZnet W5200 chip provides an Ethernet to SPI bridge which is interfaced with Parallax’s 8-core microcontroller, 🌎the Propeller P8X32A. The data served to a network can be anything you want – web pages, serial data, email, and more. Many useful demo programs are available for download from the product page to get you started, including a webserver capable of serving dynamic data from the SD card to your favorite browser. Advanced users can develop firmware that allows 🌎the WIZnet W5200 board + 🌎QuickStart to respond to or generate any type of network traffic. 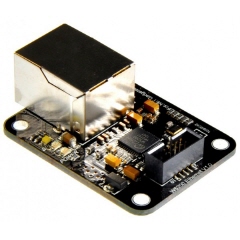 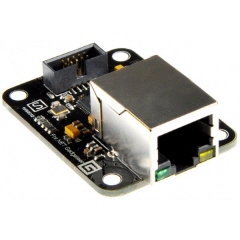 This 🌎W5200 🌎Ethernet Module is .NET Gadgeteer compatible, which uses the .NET Micro Framework to make writing code for your device as easy as writing a desktop, Web or Windows Phone application.

This module is composed of a fully TCP/IP stack. The Ethernet application can be easily implemented via a simple socket program. SPI is provided for easy connection to the .NET Gadgeteer main board. Compared to the W5100 it doubles the simultaneous socket connections up to 8. The onboard LED indicates the network state between 10Mb and 100Mb.

You can easily let your Gadgeteer online through this module and then your Gadgeteer main board can easily controlled wherever Internet is available. There are massive applications of it ranging from industry to avionics, telecommunication, and multimedia. 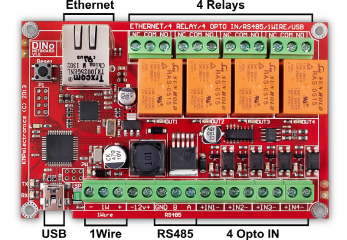 After some time spent on tuning Souliss drivers for WIZnet 🌎W5200 Ethernet controller equipped on KMP Electronics 🌎DINo v2, we got a full support of new features included in new Alpha 5 with focus on plug\&play.

Diving into the examples prepared for DINo you will found no longer need to set Quick Configuration paramters and IP configuration, that's the new inSketch mode included in the last Souliss release. Just load the example on your DINo and connect the boards to the network, they will join and be discovered by your Android smartphone automatically, doesn't matter your IP configuration. 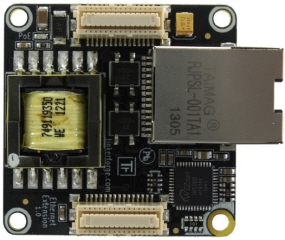 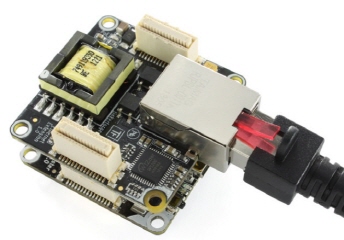 With this 🌎Ethernet Extension you can control Bricks and Bricklets and integrate them into a LAN. 10BaseT/100BaseTX Ethernet is supported and the module is 1000BaseTX compatible. The Extension is available in two variants: The PoE variant features a integrated PoE power supply. It allows to power the connected modules over industry standard IEEE 802.3af, such that a PoE injector as well as PoE switches can be used to power stacks. Additionally a variant without PoE is available.

This module is based on the 🌎WIZnet 🌎W5200 ethernet chip. 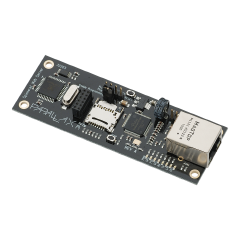 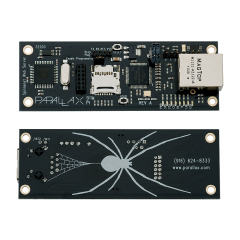 The 🌎Spinneret Web Server is an Ethernet-based development board for the Propeller microcontroller. Web page content, files, and logs can be stored on a microSD card. The serial EEPROM has 32 KB for storing a Propeller program and 32 KB for non-volatile data storage, independent of the microSD card. There is a real-time clock controller for time stamping files and events and a backup capacitor that will keep the clock running through extended power outages. There is a serial programming header and two auxiliary I/O connections, one for level-shifted open collector communications over a three-pin data/power/ground cable, and the other is a 12-pin socket for direct 3.3 volt I/O connections. There are eight status LEDs on the circuit board, plus two that are repeated on the Ethernet jack. One of the status LEDs is user-controllable and shares a line with a button that can be read under user control. A second button resets the Propeller to reload the firmware from the EEPROM. 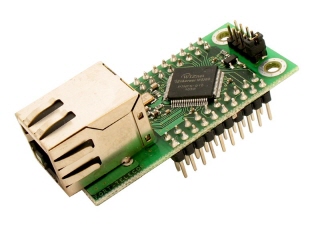 🌎FT811mj network module is based on a network controller 🌎W5100, and contains the necessary passive components, RJ-45 connector with integrated transformer and LEDs, and is a complete analog modules 🌎WIZ810MJ/🌎WIZ811MJ/🌎WIZ812MJ Addiction 🌎Wiznet. 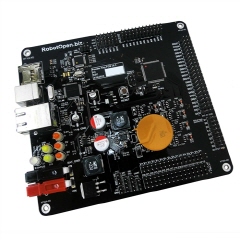 The 🌎Sasquatch Robot > Controller is an 🌎Arduino Mega variant made by 221 Robotic Systems. This board utilizes the RobotOpen Protocol to stream line information from a computer to the robot and is compatible with existing Arduino Libraries. This is an excellent robot controller, utilizing wi-fi based operation for mobile robots. Users can access any newly expanded I/O using the included libraries.

This board comes bundled with RobotOpen Arduino Library and Driver Station App. These software packages allow you to control the Sasquatch board via USB joysticks and gamepads and establish robust two-way communication. The library includes many examples for common tasks and drive code for tank, mecanum and crab drive bases.

A newly updated Driver Station app is web-based and features graphs, charts and data-logging along with graphical mapping of input devices. 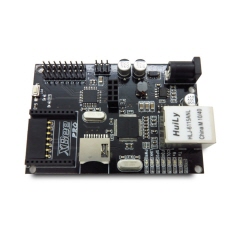 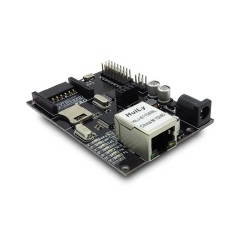 🌎Iboard is a unique Arduino platform which features a 🌎Wiznet W5100 Ethernet > chip an XBee socket, nRF24L01+ wireless interface and an ATMega328. This board will add wireless XBee / nRF24L01+ control as well as internet connectivity to your projects. It’s great for anything from home automation to robot control. 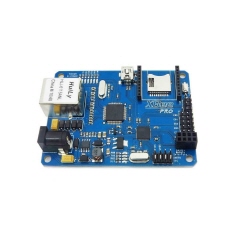 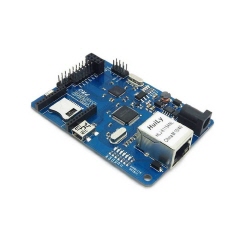 🌎Iboard EX is a unique Arduino platform which features a 🌎Wiznet W5100 Ethernet chip, an XBee socket, nRF24L01+ wireless interface and an ATMega32U4. This board will add wireless XBee / nRF24L01+ control as well as internet connectivity to your projects. It’s great for anything from home automation to robot control. 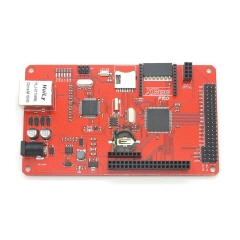 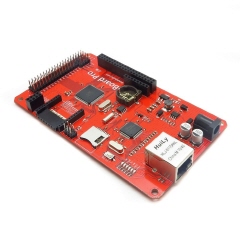 🌎Iboard > Pro is a unique Arduino board which features a 🌎Wiznet W5100 Ethernet > chip with POE, an XBee socket, ITDB02 Serial/Parallel LCD module interface, RTC, nRF24L01+ module interface, Micro SD socket and an ATMega2560. This board will add wireless XBee control as well as internet connectivity to your projects. It’s great for anything from home automation to robot control. The possibilities are endless! 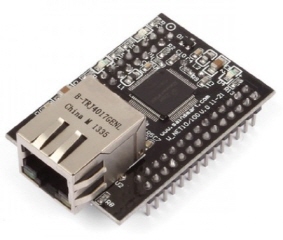 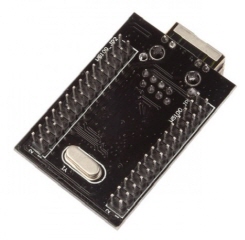 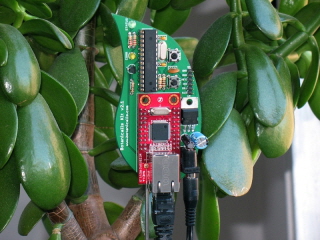 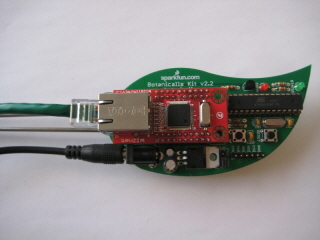 🌎Botanicalls Kits let plants reach out for human help! They offer a connection to your leafy pal via online Twitter status updates to your mobile phone. When your plant needs water, it will post to let you know, and send its thanks when you show it love.